Flood-free Areas in Lagos You Should Invest In

Recently, Nigeria has been facing a quandary of epic proportions. The statistics are truly frightening in what has been described as the worst flooding incident in decades. Currently, at least 31 states have been affected and about a million people displaced, hundreds of lives lost and billions of dollars in agricultural produce lost.

Lagos, sadly, is not left out. This news is quite disturbing and unsettling to the average Real Estate investor. How does he or she invest in a property that could potentially be badly affected by floods?

There are several factors that influence flooding, factors as human activities, poor planning and climate change. Added to that, due to the geography of Lagos State, it is naturally prone to flood. Its highest altitude is 77km and its lowest altitude is 25km(below sea level), the reason for the concurrent flooding disaster cannot be far-fetched.

Thankfully, we have areas in Lagos that do not get flooded 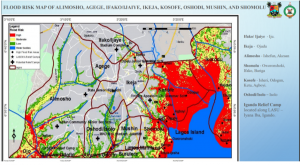 Areas not affected by Floods in Lagos. Source: LASEMA

This is the highest altitude in Lagos(77m above sea level), residents barely have floods to worry about due to the city’s high elevation above sea level. Cases of flooding in this area are far between or only due to human activities. The effects, however, are usually minor and not very devastating.

A city in close proximity to Agege, located the North of Lagos, has just about 0.54% risk of flood. Ifako Ijaiye also has one of the highest altitudes in Lagos(about 75km). This keeps the land safe from rising sea levels and floods.

The capital of Lagos is comfortably 68km above sea level, however, Ikeja seldomly still experiences flooding. This is due to the below-par drainage system and largely due to human activities in the city. Activities like blocking of water channels, road constructions and reconstructions of some drainage systems. Ikeja should be back to being flood-free once all projects are completed.

Is one of the affluent areas in Lagos state. Magodo is on the Lagos Mainland, located close to the border between Lagos and Ogun State, along the Lagos-Ibadan Expressway. Magodo is 40m above sea level. It is also a very calm area, free of traffic and in a very peaceful environment.

After reading this article, one might begin to wonder, are there no places on the island, not flood-prone? Lagos Island is statistically 25% below sea level, making it the area most prone to flood. However, there are actually many areas and properties on the island totally free of flood due to very deliberate and proper planning by the developers. Finding such properties, however, will require an experienced and skilled Realtor like one of those we have at Ramos Realty.

Why You Should Invest in Short let Apartments

When Brian Chesky and Joe Gebbia started their bed and breakfast venture in October 2007, they had no way of knowing that their idea of leasing short term apartments to […]

As part of our expansion efforts and in response to increasing demand for international listings from our clients, Ramos Realty Dubai has been birthed. Dubai emirate is an investment goldmine […]

Why Real Estate in Lagos is so Expensive

According to Forbes.com, Lagos is the 55th most expensive city to live in the world. For prospective homeowners, the very high valuations on property prices pose one of the greatest […]

Why You Should Invest in Short let Apartments

Flood-free Areas in Lagos You Should Invest In

Why Real Estate in Lagos is so Expensive

Send us DM on WhatsApp